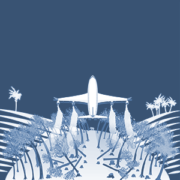 The aviation industry identifies ‘sustainable aviation fuels’ as a key tool to manage the growing climate impact of aviation. There are, however, fundamental differences between the sustainability risks associated with the scaling up of the different available alternative aviation fuel technologies. At present, the only alternative aviation fuel technology that is operational at commercial scale is ‘HEFA’ (hydroprocessed esters and
fatty acids), which can be produced at renewable diesel facilities. The feedstocks for HEFA production are primarily vegetable oils, and a rapid expansion of demand for HEFA fuels would put considerable pressure on the global vegetable oil market. That can be expected to lead directly or indirectly to increased production of palm and soy oils. Both the oil palm and soybean crop are associated with ongoing tropical deforestation.

In this report for the Rainforest Foundation Norway, we review the potential for growth in palm oil and soy oil demand due to the introduction of ‘sustainable’ aviation fuel support policies. The report shows that delivering stated ambition without actively managing the technologies and feedstocks used could increase vegetable oil demand by tens of millions of tonnes, and details the potential deforestation, peat loss and climate implications of meeting those targets with a significant contribution from palm and soy oils.

While the worst case scenario is that stated aviation targets would be met without managing the feedstock mix, the report also notes that it currently seems likely that most of the targets discussed will be missed entirely. If so, aviation needs to find viable options to manage its climate impact – that may well need to involve management and limitation of demand growth.